Status: First draft has been sent to the editors.

While the 1980’s may be considered the heyday of horror films, it is perhaps more prominently remembered for the dramatic changes to the cultural landscape and social turmoil synonymous with the Reagan Era. Retrospectively, we can identify that it was often horror movies that illustrated the innate fears posed by social unease, acting as a mirror through which society might confront the consequences of challenging the status quo. As a reflection of increased divorce rates and the subsequent rise in broken families, cinematic depictions of single parent homes as a target for various forms of horror reflect many aspects of unrest that surrounded adolescents with an absent parent. With this theme in mind, this paper considers Tom Holland’s ‘Fright Night’ (1985) and Joel Schumacher’s ‘The Lost Boys’ (1987), as exploratory texts for the recurring theme of the absent father. Although absent fathers are present in several 80’s horror films, these two have been selected because they focus on adolescent men as primary characters. Rather than more traditional ideas, in which the female, unguarded, becomes the object of the serial killer, in these films it is the unguarded male who is not only in danger but becomes dangerous. 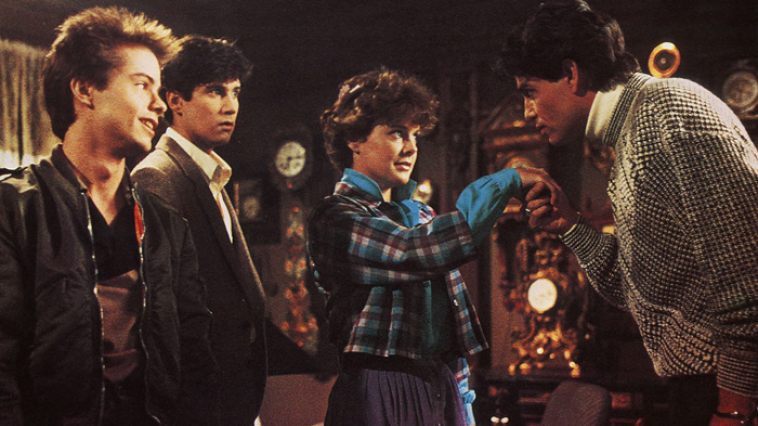 In both ‘Fright Night’ and ‘The Lost Boys’ vampirism functions as the main plot point. Whereas the vampire next door motif is interwoven with comedic elements in ‘Fright Night’ though, by contrast, it is used alongside the gothic in ‘The Lost Boys’. In both cases however it is closely related to sexual encounters and uncertainty associated with reaching maturity. So too, in each film the male characters are without parental supervision when they encounter the vampire and, without the guidance of a father figure, must eventually turn outside of the family for assistance. In each case, the characters most impacted by the ‘horror’ of vampirism are also saved by virtuous action, with their ultimate return to virtuousness/safety dictated by the influential feminine characters in their lives. Although the settings differ, after triumphing over the vampire both Charlie and Michael become replacement father figures within their redefined family unit, by assuming the role of ‘man of the house’. Part of this transition also involves them saving the females for whom they are responsible.

Ultimately, the project will demonstrate that, in the horror films of the mid and late 80’s, the breakdown of the family unit and the subsequent absence of the father figure was equally as detrimental to male teens as to their female counterparts. Unlike female focused horror films however, those with male leads explored different moral and ethical subplots. Rather than merely surviving, for male characters, an integral part of their triumph over evil was not purely physical but involved an ascension to emotional maturity, which in turn allowed them to change from ‘boys’ into ‘men’ and, in doing so, become replacement primary male figures within the home and family.